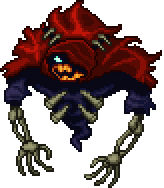 The lich is a difficult Hardmode boss, that can be summoned at night after crafting a Soul Forge and obtaining Hallowed Bars, Souls of Night and Pumpkins.

While The Lich is alive, its exclusive Music will play.

The Lich does not spawn on its own, and requires the player to summon it with a Grim Harvest Sigil at night.

The Lich flies after nearby players, unleashing dark magical attacks, and ramming into the player for massive damage. 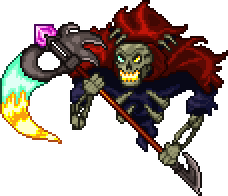 The Lich (Unmasked) is the Expert Mode only form of The Lich, to which it will transform once it reaches 40% health. It has a variety of new abilities.